October 23, 2018
On October 15 to 19, 2018 the 10th Pan-European Green Belt Conference took place in Eisenach, Germany, and Karelian Research Centre RAS took part in the event.
The conference gathered over 100 participants from 24 European countries.

The European Commission has highlighted the importance of the 12,500-kilometre-long European Green Belt by recognizing it as a project of European importance. "The Green Belt initiative is a model for cross-border cooperation between governmental and non-governmental organizations. This is the only way to maintain and develop the Green Belt as the backbone of a European network of ecological corridors", says Prof. Hubert Weiger, chairman of the BUND and member of the EuroNatur board, which have co-organized the event.

The northernmost part of the European Green Belt – the Green Belt of Fennoscandia (GBF) – was represented at the forum by partners from KarRC RAS, Metsähallitus, and University of Eastern Finland. At the plenary session, Metsähallitus representative Aimo Saano and Head of the KarRC RAS Department for International Relations Pavel Petrov gave a talk about GBF cooperation in 2017-2018. They told about the workshop that was held in the Republic of Karelia earlier in October, about the possibilities for the network partners to participate in ENI cross-border cooperation projects, as well as about the outlooks for cooperation between Russia, Finland and Norway for GBF development.
During the meeting of the Working Group on improving the interactions of authorities with NGOs, research and educational organizations to invigorate activities in the Green Belt of Fennoscandia its participants analyzed the experiences of environmental organizations and national parks in 10 European countries, and worked out proposals for promoting the activities.

At the General Assembly (steering body) of the European Green Belt Association, where P. Petrov took part as an observer on behalf of KarRC RAS, representatives of the member countries presented their ideas about continuing the work on a joint project combining all the 4 parts of the European Green Belt, as well as their proposals on involving Russian partners in the collaboration. The appointment of KarRC RAS Acting President Olga Bakhmet as the regional coordinator of the Green Belt of Fennoscandia has been endorsed. 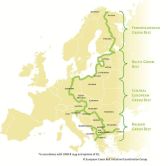 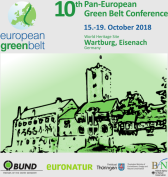